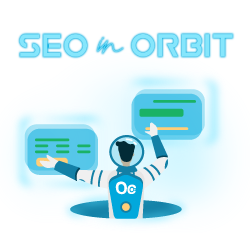 “Technical SEO and its related subjects are still underrated. We believe it is important to raise awareness of the major advantages of incorporating technical practices into our day-to-day SEO routine. We hope we have helped SEOs to understand why it is critical to
master technical SEO today to win the search race,” commented François Goube, CEO and Co-Founder at OnCrawl.

Elevating SEO to 30,000 meters above the Earth

OnCrawl has unveiled a series of rebranding measures over the last few months to
consolidate a brand identity that resonates with its three core values – innovation, ambition
and authenticity. “SEO in Orbit” is one of the highlights.

“We were working on our rebranding—which echoes the universe of outer space—and we
came up with this crazy idea: What if we sent the best SEO tips into space? There’s too
much talent on Earth to keep it here,” shared Emma Labrador, Head of Marketing &
Communication at OnCrawl.

This is how the webinar series came to life. Following each webinar, OnCrawl collected the
most popular tip from each influencer, bringing the count of actionable SEO tips to a total of
11. Then, on June 27, 2019, the OnCrawl team and hosts of “SEO in Orbit” gathered at the
launch site near Bordeaux, France, to send an iPad loaded with SEO tips into near space at
30,000 meters above the Earth.

“I was immediately seduced by the concept when the OnCrawl team contacted me. I didn’t think I would ever have the chance to go to space, so knowing that my SEO
recommendations have gone there is quite exciting,” said Detlef Johnson, Editor at Large for
Third Door Media.

OnCrawl worked with Sent into Space, a company specializing in near-space projects, to build the payload—a helium-filled balloon—and complete the launch. The three-hour flight was documented using an onboard camera, offering spectators a captivating show before the balloon exploded at the completion of its mission and descended back to Earth. The balloon was equipped with a GPS and was retrieved near the launch site. Ahead of the mission, Matt Lanning, Head of Creative at Sent into Space, expressed his enthusiasm for the launch, commenting:

“We’ve conducted flights from sites across the world, but we have rarely been to France and the views over Bordeaux were spectacular.
OnCrawl has a really clear, creative vision and have been really pleasant to work with. Their
SEO advice truly is out of this world—we’ve actually used their feedback to improve our own
website! They’re working at the cutting edge of digital technology and this space flight is a
perfect way to reflect that.”

You can watch replays of all 11episodes, or watch the flight on OnCrawl’s Youtube channel.

Julie Quintard See all their articles Become an Oncrawl author
Julie is working as a Marketing Manager at OnCrawl. She is a real marketing and digital passionate and regularly writes articles about SEO and OnCrawl news. You can reach her on Twitter.